Week 6 of the 2020 session ended with the funeral of a colleague in the House, Representative Greg Lewis. Rep. Lewis resigned in February of 2019 to focus on his health after being diagnosed with brain cancer. Rep. Lewis was a devoted servant to Kansas and its people, and he will be missed.

The legislature is locked in gridlock at the moment based on two issues: the Constitutional Amendment regarding abortion and Medicaid Expansion. No action occurred on the Amendment resolutions, and Medicaid is being stopped in the Senate. We worked bills on the floor mostly of a non-controversial nature.

Don’t forget, committee hearings and legislative proceedings are live streamed from the Kansas Legislature’s website. Archived recordings are available as well. Visit www.kslegislature.org and click on “Audio/Video” in the upper right-hand corner, next to the search box on the home page, to reveal a drop-down menu. To view a full schedule of committees, choose “Statehouse Live & Archive” from the drop-down menu. To listen to legislative proceedings, select either the House or Senate audio stream.

As I reported last week, a hearing for the bipartisan legislation that I introduced to build a new Veterans' Home in Northeast Kansas was blocked by the House Social Services Budget Committee Chairman. The Chairman's justification for blocking a hearing on the legislation was "we don't have enough time."

We still have other options to bring this legislation to the House floor and to work with the Governor. We need to let Veterans be heard. Kansas Veterans deserve better treatment, and a majority of our state’s elderly veterans live in the Northeast region of the state. We have VA facilities in Topeka and Leavenworth. It just makes sense to take advantage of the VA cost-share program and at least start the process to have a purpose built modern facility with all the personnel efficiencies new construction brings.

In the House Committee on Public Safety and Transportation Budget, where I serve as the Ranking Member, we passed a Corrections budget that includes appropriations authorization for a new mental health facility to be constructed at Lansing Correctional Facility and approved a new Transportation budget.

In the House Committee on Public Safety and Transportation Budget, we reviewed and passed out the Department of Corrections budget. I’m particularly excited that we have included budgetary authorization for a new mental health facility at Lansing Corrections Facility.

There will be a new facility built that will house 200 new beds focused on mental health. Unfortunately, without addressing the mental health and addictive behaviors of prisoners, the prisons become a downward spiral of recidivism. Having this new facility located in Lansing will undoubtedly bring additional jobs.

The Transportation budget also passed out of our committee. We have greatly reduced the amount of money transferred out of Department of Transportation programs since the Brownback era, meaning we can properly invest in road maintenance and new projects. Through continued advocacy by the Leavenworth and Lansing communities, our own Leavenworth Centennial Bridge is on the KDOT plan for expansion in coming years.

Outside of the budget, there is new policy. The administration's new transportation plan has been named FORWARD. The plan is contained in Senate Bill 375. It is an all-encompassing transportation program that would give attention to transit, aviation, rail, bike, and pedestrian solutions in rural and urban communities throughout Kansas.

FORWARD is flexible and responsive by allowing communities to shift priorities and project scopes to better address current and future needs. Each Kansas county would be provided with at least $8 million in transportation improvements while leveraging partnerships with local communities to generate local match and input to stretch dollars further.

In addition to calling for the completion of delayed T-WORKS projects and putting an end to transfers from the highway fund, it implements a two-year rolling program approach. Major projects are selected every two years rather than once a decade; priority is given to preservation and addressing safety needs.

By June 30, 2030, no less than three expansion or modernization projects would be selected for development from each of the Kansas Department of Transportation’s six districts.

Last week in the House Committee on Veterans and Military, we were briefed on a program started by a former First Sergeant who now teaches at Ft. Hays State University, Dr. Seth Kastle.

Dr. Kastle has mirrored a program put on by the Air Force, which seeks to leverage training in military with school programs. By having universities recognize the education already paid for, there is less duplication of training, saving taxpayers money because they aren’t duplicating this training with GI Bill money.

It’s a program around Officer Candidate School for National Guard. In this program, enlisted can take advantage of when they want to move to being a commissioned officer. This Ft. Hays State University program allows the National Guard member to work toward a bachelors program while leveraging the training the soldier has already completed.

This is similar to a program put on by the Kansas Board of Regents. Kansas Board of Regents Credit for Military Alignment Initiative is a collaborative effort by Kansas institutions to examine university course as compared to the skills and outcomes of military training. Both these programs are unique to Kansas and with online education expanding, presents a unique opportunity for military around the world.

Two attempts were made on Thursday, Feb. 20, to move the bill containing the bipartisan Medicaid Expansion compromise out of committee. Both attempts failed.

Prior to the attempts to get the bill out of committee, the bill was amended with provisions that allow discrimination of LGBTQ patients by medical providers, establish work requirements for eligibility, and block state funding for abortions. It’s important to note that there are already state and federal laws that prohibit public dollars from being used for abortions.

The bill also was amended to establish that, if passed, Medicaid Expansion would not go into effect until a decision is made by the United States Supreme Court regarding the constitutionality of the Affordable Care Act (Texas v. United States) and the constitutional amendment concerning the regulation of abortion is approved by the electors.

Unfortunately, this particular bill is likely dead. However, we are still optimistic to get Medicaid Expansion to the floor of the Senate for a debate and vote this session.

Executive Order 45, however, which transfers the functions of the state employee health benefits plan and state workers compensation self-insurance fund from the Department of Health to the Department of Administration, was passed out of committee favorably.

The EROs fall under Special Orders of Business on the House Calendar, where they’ll remain until the Speaker assigns a date for them to be worked on the floor. If no legislative action is taken on these resolutions, the EROs automatically go into effect.

In the Brownback era, these type of reorganizations were standard course of action, allowing the administration to do what it deemed it needed to operate. These EROs have now become heavily politicized between Legislative leadership and the Governor.

Turnaround Next Week Next week the Kansas Legislature goes into turnaround week, where on Thursday the House receives the bills passed through the Senate, and the Senate receives the House bills. The Legislature is traditionally on the floor all day for several days. However, because of the gridlock mentioned above, it is unknown how many bills the House will actually work.

Bill on the House Floor

Other Bills of Interest

The Kansas Chamber of Commerce, which is pushing for the bill now in the Legislature, opposes any bans on plastic items, including bags and straws. If passed, Kansas will be one of 15 states that have enacted pre-emptive laws against plastic bans. Opponents argue the bill infringes on the local control cities as guaranteed under Home Rule Amendment to the Kansas Constitution.

The House Committee on Corrections and Juvenile Justice is expected to take final action on a bill that would require Kansans in prison for unlawful possession of a marijuana or THC to be released. House Bill 2686 would also require all Kansans on probation or assignment to a community correctional services program for such violations to be discharged.

The Senate Committee on Ethics, Elections, and Local Government held a hearing this week on Senate Bill 351, which would allow a person who has not registered to vote and whose name does not appear in the polling book to vote a provisional ballot.

The individual would have to be qualified to vote and would need to complete the application for registration. The provisional ballot would be counted so long as the county board of canvassers determines the ballot was property cast or the voter has not otherwise voted.

SB 412 allows any registered voter to apply for permanent advance voting status. Under current law, you must have a bona fide medical justification to receive an advance ballot on a permanent, continuing basis with re-application for each election.

This legislation provides that if a person fails to vote in two consecutive elections or if the clerk receives notice that the mail of the person is undeliverable, the person will no longer have the status. The Senate Committee on Ethics, Elections, and Local Government held a hearing on this bill this week.

I met with the Guidance Center team in Topeka this week. It was good to meet the Masters and Ph.D. candidates that are working with our Leavenworth facility as part of their required internships to eventually work in the mental health field.

In 1897, Captain Huston founded the Leavenworth High JROTC program, one of the first in the nation. When started, students were trained using broomsticks for guns and drills were conducted in an old courthouse. Times have certainly changed.

In 1961, Leavenworth High School established the first Ranger unit in the nation. This platoon, modeled after the elite Ranger units, perform missions with tactical objectives and seeks to train the most dedicated and elite cadets to do their best. The unit still exists today, called the Raiders, participating in many challenging activities.

Every year, Raider teams compete regionally and then come together at the National level in Molena, Georgia to determine the best of the best. In a field of 92 teams that made it to the national competition, the Leavenworth High School Raider team was the best in the nation.

Beyond the extreme dedication and ability of every member of the team, part of the secret was having two of the individual winners, Cadet Captain Kanya Halle, who has is the back-to-back top Female Raider nationally, and Cadet Joseph Pervis, who won the top Male Raider.

Another part of the winning combination was the guidance and energy of the coaches, First Sergeant Codgil and Ms. Mary Schwarz.

I was happy to welcome three students from Leavenworth to page with me this week, Hannah, Malory and Delaney. Glad they were able to meet the Governor and Lt Governor! 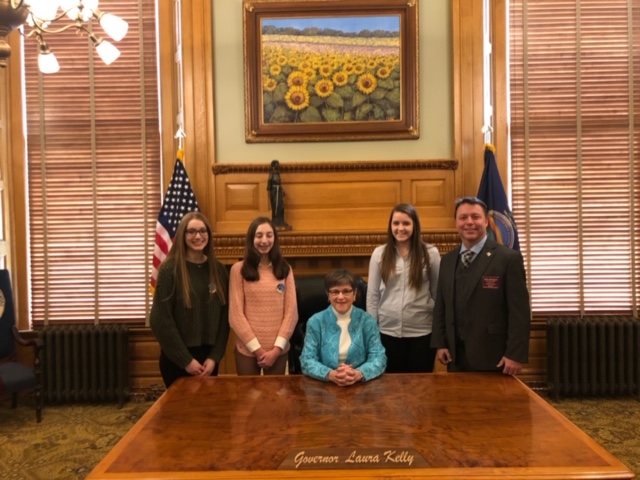 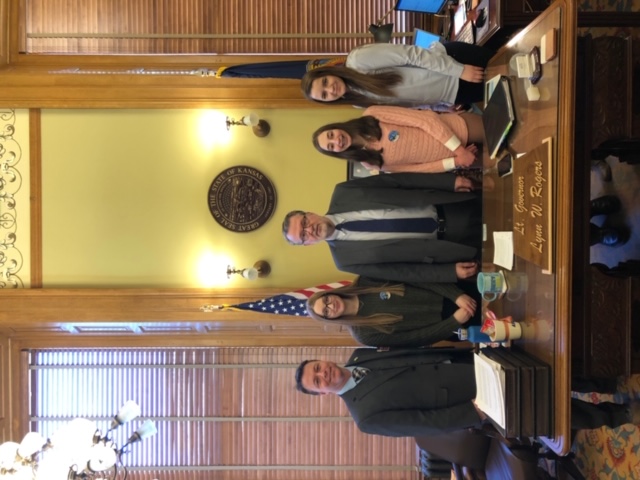 My Honor to Represent You

It is a special honor to serve our community in the Kansas Legislature. I both value and need your input on the various issues facing state government.

Visualization of the Governor's Plan to Re-Open the Economy